If I were to write an Amazon review of A Simplified Map of the Real World by Stevan Allred, it would probably be the following:

A Simplified Map of the Real World is a collection of 15 linked short stories that take place in Renata, Oregon and stretch through time and across generations. Readers are treated to revenge-seekers, thrill-seekers, and attention-seekers. There are secrets: the small town, gossip-worthy kind and the kind that can eat a person alive from the inside, along with the judgement that inevitably and permanently attaches itself to hidden truth. Each piece is an artfully crafted tale of human nature.  I found myself laughing out loud a lot, gasping, or feeling heartbroken.

It would definitely be a 5-star rating.

There is, however, so much more to this book. 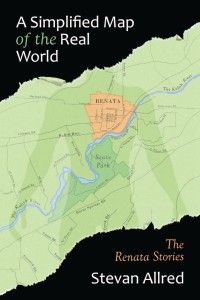 Stevan Allred masterfully writes from 15 different points of view, giving each narrator a very distinct voice appropriate for the character. It’s hard to believe the author who wrote from the hilarious viewpoint of a crotchety old fart is the same person who wrote so poignantly from the perspective of a dying Native American woman. When he tells the stories of two neighbors or of a father and son or a nephew and an uncle, he doesn’t retell the same story twice, once for each view. Instead, Allred gives us new stories with some of the same people, told by unique voices. He does it brilliantly, proving that a writer need not be pigeonholed into a single writing style.

The stories are not in chronological order, nor do they start with the biggest event and work their way out. It’s a brilliant approach because this book isn’t about one central character; they are all strong and important. No one piece is more important than the other, and the ordering allows each story and character to be equally weighted. I love that the book starts with a couple of warring neighbors and flows out into Renata from there. I think of it like throwing a stone into a pond and watching the ripples hit the shore and cross over themselves on the way back.

I was asked which of the short stories was my favorite. I had just put the book down, so I said I needed some time to absorb it all and contemplate. The truth is I loved all of them. On the surface, they are great stories. Just below the surface, I found a way to connect with each one.  Renata, Oregon is a fictional town that feels real because the characters are our families, our neighbors, our friends, even us. But digging a little deeper, these are the kinds of stories I love, stories about characters we find easy to judge, then learn why they are who they are. It doesn’t excuse bad behavior, but as readers we can learn to feel compassion for them and maybe, by extension, for people in the real world.

Stevan Allred’s A Simplified Map of the Real World officially launches on Thursday, September 12, 2013 at Powell’s Books in Portland, Oregon. Copies are now available at Powell’s for you lucky local folks, but will begin selling via the big online stores on the 12th. If you are in the Portland, OR area, the author will be reading from his book and signing copies on the 12th at 7:30pm at Powell’s – his name is even on the marquee! 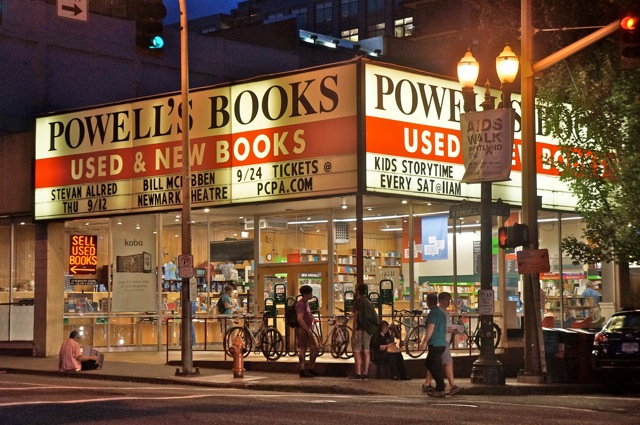 6 thoughts on “Review: A Simplified Map of the Real World by Stevan Allred”